With the UK's major energy suppliers bumping up their prices by up to 18% this winter, the belated arrival of the cold winds represents a great opportunity to look at ways of cutting your fuel bills.
The imminent announcement of a consultation on the government's Green Deal, which aims to help you make your home more energy-efficient, should provide an added incentive.
And there are lots of ways you can save money - in some cases a great deal - just by making a few simple upgrades to your home.
Some improvements cost virtually nothing and can take a matter of minutes to install; others require a bit of capital and expert help. Others still require small changes in habits that should more than reward the effort.
All are well worth considering. According to the Energy Saving Trust (EST), the average household could save about £280 a year on its fuel bills by being more energy efficient. Bearing in mind the average bill is about £1,300, that's quite some saving.
This equates to more than a tonne of carbon emissions every year, thus helping to combat rising global temperatures.
There are plenty of schemes around to help you get a better idea of what upgrading your home to make it more efficient actually involves.
Old Homes Superhomes is one such project, which is supported by the National Energy Foundation. Sarah Harrison, head of Eco-refurbishment, says the scheme can help people understand not just the financial benefits of so-called retro-fitting, but also how upgrading homes can improve your quality of life.
Insulation When it comes to energy efficiency, the smallest measures are often the most effective, so insulation is a good place to start.

The most cost-effective energy efficiency measure you can use is to place kitchen foil behind your radiators to reflect heat, according to the National Energy Foundation.

Doors and windows can then be sealed quickly and easily using self-adhesive foam and rubber strips, and draught excluders. Seal up any gaps between your floors and skirting boards and, together, these measure could save you more than £50 a year, according to the EST.
Next look at insulating your loft and walls properly - about a third of an uninsulated home's heat is lost through the walls, and about a quarter through the roof.
Walls will require varying degrees of works depending on their construction, but proper insulation can save hundreds of pounds a year. Just topping up your loft insulation can also shave a substantial amount off your annual bills.
Also look at secondary and double glazing - almost 20% of heat loss from the average home comes from windows.

Heating Upgrading old electric storage heaters to modern alternatives can save you more than £100 a year, and in some cases considerably more.
Replacing an old, inefficient boiler with an A-rated condensing model could save as much £300 a year, although you will have to decide whether this is worth the £1,000 to £2,000 cost of buying and installing one.
Even fitting a room thermostat could save you more than £50 a year.
Energy-efficient behaviour You may scoff at the point of turning off appliances when you're not using them, but add up all the savings and they can be worthwhile.
For example, switching plugs off at the wall and avoiding standby mode on TVs, computers, stereos and the like, together with switching off lights when you don't need them, could save you almost £50 a year.
Wash your clothes at 30 degrees instead of 40 and don't use a tumble dryer in the summer, and you could save another £30.
Upgrading appliances/electronics If you need to replace any domestic appliance, then it may be worth spending a little extra to get the most energy-efficient model you can afford. Some fridge/freezers with an A+ energy rating can be incredibly affordable.
They are all rated by law, from A to G, so you can tell how efficient they are. However, there is a great deal of variation within these bands, so also make sure you look at the specific figures on energy consumption. Some appliances, such as dishwashers and washing machines, also have grades A+++, A++ and A+.
Very roughly, a new efficient appliance could save you between £20 and £40 a year on energy bills, according to the EST.
More modern consumer electronics are also more energy-efficient. And if you're looking for a new television, bear in mind that LED TVs are more efficient than LCDs, which in turn are a good deal more efficient than Plasmas, according to Which?
Not strictly an appliance, granted, but replacing old incandescent light bulbs with energy efficient versions can save you £3 a pop. 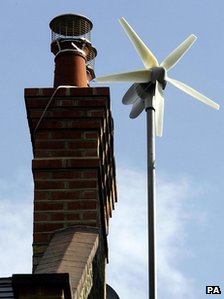 These measures aren't about upgrading what you already have, but investing in technologies that allow you to generate your own energy.
As a result, they can be quite expensive, which is one of main reasons why the government is launching its Green Deal.

Feed-in tariffs are available for domestic energy generation
One way is to use wood to heat your home. According to the EST, replacing electric heaters with a wood pellet heating system could save as much as £580 a year.
Carbon emissions would also be reduced, as the carbon dioxide given off when burning is offset by the carbon absorbed by the tree from which the wood was cut.
Solar panels are another popular way to generate power, and can typically provide about three-quarters of an average home's electricity needs.
Wind turbines are an alternative that, if situated in the right part of the country, can provide more than enough electricity to power a typical home.
Government feed-in tariffs mean you get paid to generate electricity, and for selling any excess to the main grid. In fact, one turbine could generate savings and income of more than £3,000 a year including tariffs, the EST says.
Another option is heat pumps, which take heat from the air or the ground but which need electricity to run. In some cases, these are better at saving on carbon emissions than money.
You will need to calculate the payback time carefully when deciding whether to invest in any of these technologies. But remember that if you sell your home, the buyer can also benefit from the cost savings, which can add to the value of your property in their eyes.
Posted by S Thompson at 08:57