Do I Need A Flue Liner? 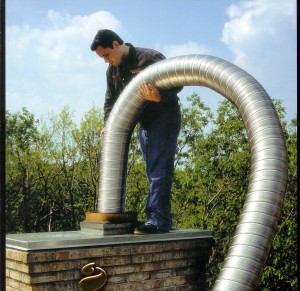 If you have a standard masonry chimney and wish to install a woodburning or multifuel stove, it is highly advisable to fit a stainless steel flexible flue liner with the stove.

A question frequently asked is whether the flue should be insulated - this is done by backfilling the chimney around the flue liner. This is not necessary, but can be beneficial if you have a particularly cold chimney i.e. external, very exposed and very large. Normally the warming of the air in the chimney surrounding the liner during burning is sufficient for insulation.

They are also frequently asked whether a flue liner is necessary to comply with building regulations. It does not state in the building regulations that a flue liner has to be fitted with a stove. However, you must be sure that the chimney is in good working condition and has been sufficiently maintained. The majority of installers and retailers will recommend fitting a flue liner; particularly in older properties, as it is safer and more efficient.

We do not advise asking your installer not to fit a flue liner purely on the basis of cost. Once you have made the one off investment, your stove and flue liner, if properly maintained, will last for years. Most stove and flue manufacturers offer a warranty on their products - for example, Corinium offer a ten year warranty on our flue liner, subject to conditions of use.
Posted by S Thompson at 13:27