The 2013 Legend Fires North West Stages took place on Friday/Saturday 8th/9th February, a week later than in recent years. It was the tenth successive year that Legend Fires, the company owned by Skoda Fabia WRC driver John Stone, have been the main sponsors of the Blackpool based event. His white, red and black Skoda Fabia adorned in the company's livery seen flying around the stages. 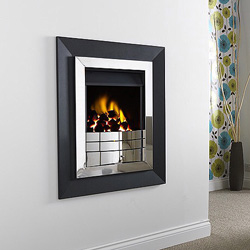 Producing a large range of gas and electric fires such as the stunning new Legend Virage HE (High Efficiency) gas fire, Legend Fires are one of the premier manufacturers in the UK and proud to sponsor such an event on an annual basis.
The Virage HE Produces an incredible 4.6kW heat ouput and runs at a true 67% efficiency, well above the standard 40-50% of a traditional inset open gas fire. Due to the high efficiency, the Virage has a lower than average gas input meaning that NO room air ventilation is normally required and the open fronted finish mean that you can enjoy the full looks & effect of an open fire, without worrying about the heat disappearing up your chimney.. Suitable for Class 1 or Class 2 flues (NOT PRE-CAST flues)
Available in Brass, black or silver with manual control or slide control & remote control as an option