A gas explosion has injured six people, including three police officers, on Tyneside.
One of the officers suffered serious burns in the blast, which ripped the roof and front off the bungalow.
Debris was thrown up to 60ft (18m) from the house in Marian Court, Gateshead.
The six, including a paramedic, gas engineer and an elderly man who lived at the bungalow, are in hospital in a stable condition, police said.
Supt Dave Byrne, of Northumbria Police, said: "The house has been completely destroyed.
"It has been a sizeable force that has caused the damage."
'Blown off his feet' The officers reported a strong smell of gas after they were called to the property when concerns were raised for the safety of the man in the house.
The occupant was being led away by a paramedic wearing protective gear when the blast occurred.
The paramedic shielded the pensioner from the worst of the force of the explosion, a North East Ambulance Service (NEAS) spokesman said. 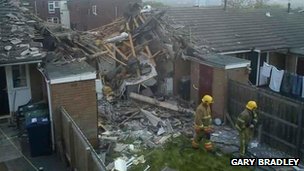 "Our paramedic suffered chest injuries and was blown off his feet by the force of the explosion as he shielded the elderly man," the spokesman said.
Three police officers who had led the man from the bungalow were also hit by the explosion, along with a gas engineer.
Neighbouring flats were evacuated.
Sean McKee, from Tyne and Wear Fire and Rescue service, said: "There were police officers trying to remove the elderly gentleman from the property when the blast happened.
"They removed the gentleman but sustained various injuries which has resulted in them being taken to hospital.
"The officers tried to vent the property while trying to remove the gentleman from the property."
One eyewitness told the BBC: "It was a huge explosion which shook neighbouring properties and destroyed the bungalow."
The Health and Safety Executive is leading an investigation into the explosion, police said.
The injured paramedic is a member of the hazardous area response team trained to deal with non-standard 999 calls.
A spokesman for the Northern Gas Networks said: "Our engineers isolated the gas supply to the properties affected by the gas explosion in Gateshead and have made the area safe.
"We can confirm that the explosion was not the result of any issue with the local gas network."
Posted by Mark at 11:41