Hole In The Wall Fires - A Simple Guide Just over a decade ago a hole-in-the-wall gas fire was almost impossible to find, with most fires stilll following a traditional period design, while looking brilliant and doing a great job at replicating the look of a real fire, will give out very little heat into the room and uses a very large amount of gas.
Oh how the world has changed, we're less than a month into 2012, the Olympic year, and there 99 products on Fireplace Megastore alone under Hole In The Wall Gas Fires, Class 1 and 2. That doesn't include any Balanced flue or Catalytic Flueless fires that further add to the available options.
An incredible number of UK manufacturer's have created designs, as well as European manufacturers such as Drugasar, have introduced or imported an amazing array of gas fires. You can still get the traditional basket style, some of which have been improved to offer a better heat output.. 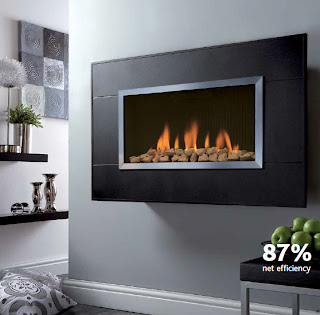 The most basic open-fronted hole-in-the-wall design is open-fronted, much like the Verine Atina, look realistic but at least 90% of all heat disappears up the chimney and research actually indicates that some designs actually remove heat from the room. Realism tends to change proportionally to efficiency. In terms of looks, inset convector fires, are realistic with contemporary surrounding metalwork and open front. Efficiency is far better than an hole-in-the-wall design and typically around 35 – 40%. Most efficient, but not realistic in some people’s view, is the glass-fronted, gas-inset, hole-in-the-wall fire, such as the Drugasar Global 90 or Apex Influence. Its glass front gives efficiencies of 70% plus, particularly when the design utilises a balanced flue (which requires no chimney– Drugasar are one of the principle manufacturers of balanced flue fires). Not all glass fronted designs are balanced flue – chimney flues and fanned flues are also common. Hole-in-the-wall fires are available with all the popular fuel effects.Although coals remain the most popular choice (and the most realistic), logs come a good second with new fuel effects like dancing flames, pebbles, driftwood and twigs also popular. Traditional hole-in-the-wall designs need coal or log effects – the more modern options simply look out of place.

Electrical Designs
There are a growing number of electric hole in the wall design. These have a number of advantages in that they do not need chimneys or other flues, are often quite shallow in depth and may simply hang on the wall. Like most electric fires, a maximum of 2 kW of heat is available from a built-in, fanned convector.Some, such as the Drugasar Metro 80e, are available as the highly contemporary frameless finish, but most offer that simple hang on the wall installation.

A recent addition to the hole in the wall range of fires available, and besides electric fires amoung the easiest to install. Unlike gas fires they do not require a chimney, flue or vent in the room and provide 100% efficiency. Another advantage of such fires means that unlike gas fires that require a Gas Installer to service the appliance every 12 months, most bioethanol fires feature only 1 moving part so are incredibly reliable.

Surrounds
A hole-in-the-wall fire is not complete without a surround. Although some people like a design that is just a rectangular alcove in the wall, most want the fire to be surrounded with some sort of fireplace. Marble and stone are the favoured materials for the surround and will probably have to be cut to size for your installation. If you use stone, make sure that it does not have a direct flame playing on the stone as some types can degrade dramatically in these conditions. Marble fireplaces can be made out of natural or conglomerate marble. However, conglomerate marble will start to disintegrate at high temperatures and is more suitable for gas fires. Also consider a brick surround. This will have to be tailor made for your fireplace but bricks are a robust hole-in-the-wall material that will stand high levels of thermal shock. 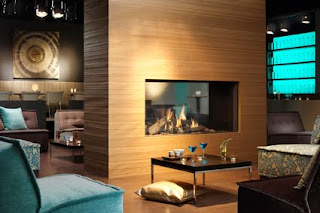 Installation
Hole-in-the-wall installation can be expensive. If you have an existing chimney, your installer will have to
‘break into’ it above the normal fireplace opening. This probably means inserting a lintel above the new opening to support the chimney brickwork. Below the new opening, the brickwork will have to be built up to the level required for your particular design. It is possible to build a false chimney breast for your proposed hole-in-the-wall fire. This would allow a flue to rise vertically from a conventionally-flued gas or solid fuel design and would accommodate the depth of the unit itself. Check with the instructions of the fire you choose as it will stipulate minimum distances that the fire can be sited from combustible materials.Some hole-in-the-wall fires do not require hearths while other do. For gas fires this depends on what was agreed when the fire was tested for conformity to European standards. Check on the requirements for the fire you want to purchase. If a hearth is required, for a open gas fire, it must be at least 50mm thick, overlap the burning area of the fire by at least 150 mm and project at least 300 mm in front of the foremost flames of burning fuel. It can be either mounted directly below the floor or a ground level – the former option is normally unacceptable on aesthetic grounds. Balanced flue hole-in-the-wall fires are growing in popularity, particularly manufacturers such as Drugasar, Site them on an outside wall and you can forget all the problems of moving lintels, etc.
Posted by S Thompson at 09:07