Some Myths about Fires & Fireplaces

As the heating season approaches incredibly quickly, with some suppliers and fitters reporting that business is already starting to pick up as the nights get longer and cooler, we thought we'd take a look into some of the common myths and misconceptions related to fires, fireplaces and stoves. 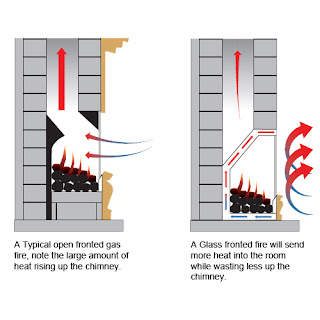 Glass Fronted Fires Give Out Less Heat and Do Not Look As Good Than Open Fronted Ones
One of the most common misconceptions I hear when visiting showrooms is the question "Will I still get heat from it with a glass front?" The answer is an overwhelming yes and going with a glass fronted fire over an open fronted model.
As heat rises it creates an area of low pressure and actually draws other air from the room into the fire, with an open fire this can cause a complete change of the air in the room up to 12 times an hour! meaning that a majority of the heat is being list up the chimney with an open fronted gas fire. While a glass fronted fire actually controls the airflow through the fire and up the chimeny, with fires such as the Apex Capacious HE, currently available from the Fireplace Megastore at just £529.
Most glass fronted gas fires also feature a convection box, this is a passage around the back of the fire for cool air to be drawn in and warmed as it passes around the fire and then circulate around the room, this helps boost the efficiency and also means you get convected heat as well as the warm radiant heat off the fire.
In terms of appearance most feedback I have heard is that the glass is only really visible when the fire is off and light is reflecting off it, but when lit the glass is almost invisible and does not detract from the overall appearance as many people assume it would.

Flueless Fires Cause Large Amounts Of Condensation
Another myth that has been blown out of proportion is that Catalytic Flueless gas fires cause heavy amounts of condensation on walls and other surfaces. It is true that flueless gas fires burn with a "wet" flame carrying water vapour into the air, however as they are designed as a complementary source of heat then the room itself should normally be of a temperature that would inhibit condensation forming. This water vapour will also quickly be dispersed around the house due to natural airflow. We found the Smeg gas fire (left) on Fireplace Supermarket

I Don't Have A Chimney So I Can't Have A Gas Fire
One of the most common misconceptions is that because your house doesnt have a chimney (most newbuild houses don't as chimenys are actually very expensive to build) doesn't mean you can enjoy the luxury of a fireplace. If you do not have a gas supply present then places such as Fireworld have a great selection of electric suites that can be just stood up against a flat wall and plugged in to instantly give that feel of a fireplace. If you do have a gas supply you can still have a gas fire or stove in your living room, there is the option for balanced flue or powerflue gas fires, these either use natural air circulation or a high-pressure extractor fan on the outside wall to draw the exhaust gases out. When combined with a surround these can create a very realistic focal point and a great complement to existing heating. Fireplace Megastore currently have one balanced flue gas stove on special offer as well as the Apex Samson balanced flue gas fire on live display for you to experience.