Which Is Better? Cast Iron Or Steel 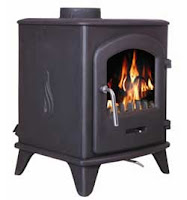 Today we address the age old question when buying a stove, do I want a steel or cast iron stove?
If you're talking about a good quality steel bodied stove versus a good quality cast iron stove then, providing the stove is used according to the manufacturer's instructions, it really doesn't matter. Poor quality cast iron stoves have a reputation for cracking and poor quality steel bodied stoves have a reputation for warping. The practical difference between the two types are that steel stoves heat up quicker and deliver heat to the room much faster whereas cast iron, which is the traditional material for stove building, because it is much heavier and provides a greater mass of metal, tends to take longer to build up heat and distribute it to the room. However cast iron stoves, which are generally heavier than steel bodied stoves, have the advantage that the mass of metal in the stove body will act like a storage radiator dispensing heat to the room a good few hours after the fire has gone out inside it. A steel bodied stove will still do this but it won't retain its heat for quite as long. So, essentially it's a lifestyle choice – if you need fast heat then choose steel and if you want longer lasting heat, say overnight, then choose cast iron. In terms of appearance cast iron stoves tend to have a more traditional finish, featuring textured cast sides and other detailing such as the Aga Little Wenlock, similarly the Broseley Serrano range feature the Broseley Logo cast into the side of the stove!

Converseley steel stoves tend to feature clean lines and can offer a more contemporary solution, such as the Trianco range, Firebelly stoves are also becoming increasinlgy popular due to their clean lines and incredible build quailty.
Some manufacturers have also decided tom combine the best of both worlds. The Portway Range feature the clean lines typical of a steel stove combined with a cast iron door, allowing the option of an enamelled door finish and allowing more heat to be radiated into the room after the fire has gone out.
Posted by S Thompson at 11:31