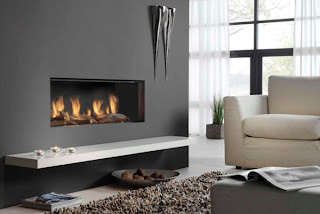 There is a great deal of debate about fuels, ranging from Carbon pollution, cost of extraction and the effect on the environment. Gas is and always will be a very clean fuel. For example, when burning wood or similar solid fuel, small particles will be released (smoke). These are unburnt parts of fuel which are then wasted, you will also be left with waste by-products (ash).But when burning gas there are no particles released and your flue system stays, more or less, clean at all times.
Gas systems also allow you to easliy regulate the temperature in the house. With DRU gas fires this is all done via a Thermostatic remote control. All their systems are calibrated in the factory to ensure your fire runs as efficiently as possible. Wasting as little energy as possible and ensuring the maximum amount of heat is coming into the property rather than heating the outside world.
Gas is also, per kWh one of the cheapest sources of energy. It's no wonder really, why more and mroe consumers, both across the UK & Europe are choosing efficient, clean and attractive gas fires designed by Drugasar. 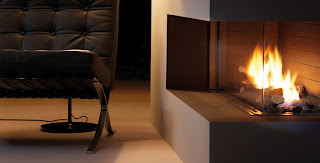 Adding to the appeal of DRU gas fires is that Europe is rich with gas, ourselves in the UK, as well as Norway, Holland and Russia all benefit from large reserves of gas, with expectations that further large reserves will be discovered in the future. Products such as gas fireplaces are becoming more and more efficienct, with up to 87% efficiency on the Metro 130. And with increasing advances in insulation, less and less heat is required to heat our homes. It is expected that for at least the next 100 years we will have sufficient gas reserves. However that does not mean we can take it for granted. This is also why Drugasar are always researching more and more techniques to extract more heat from the gas energy. One such addition is the MaxVent system popular with the Global range of gas fires. The complete Drugasar Range Of Gas Fires are available from Fireplace Megastore
Posted by S Thompson at 08:42