When Santa Got Stuck Up The Chimney 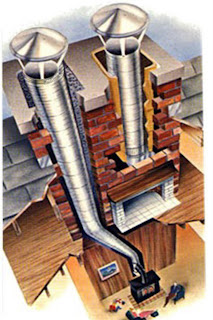 With today’s modern pre-fabricated chimney and flue systems, there is certainly plenty of scope for Santa getting stuck up the chimney,  With internal diameters ranging from 150mm – ideal for the typical woodburning stove, up to only 200 to 250mm for other more open appliances, Santa would not have to have eaten too many mince pies to get stuck!!

Why are modern flues so slim?  Well, they give the perfect diameter for the heating appliance to work.  They make use of modern materials and technology.  The modern pre-fabricated flue system allows the householder to have a versatile and flexible solution to created a wonderful and warming focal point within a room.

Traditional methods of building chimneys (and chimneys have been with us since Roman times!) are inefficient, require foundations and are very labour intensive.  Pre-fabricated flue systems are quick to install, the space required is minimal, allowing the building to maximise its living space. So what do you to say in answer to the question “how can Santa get down our chimney?”  You can of course pass it off as magic.  Just as reindeers fly through the sky, and Santa manages to deliver presents all around the world in a single night, the magic of Christmas asks us to suspend disbelief.

Or you could do what an enterprising six year old boy called Leo did.  When his family purchased a new house Leo was worried that the chimney would not be big enough to to accommodate both a large Father Christmas, and a large sack of toys.  Leo wrote a letter to the builder which said “I am worried that my mummy’s house doesn’t have a big enough chimney.  I think Santa will get stuck.  Please can you help.”

The builder responded by commissioning an architect and a mathematician to design the perfect Santa-friendly chimney, on the Lower Mill Estate near Cirencester in Gloucestershire.

A crane lifted a large Father Christmas up to the roof and lowered him into the Cotswold stone chimney which goes all the way down to the sitting room.  “A perfect fit” announced Santa. “I wish they were all like this!”
Posted by S Thompson at 14:08