How To Choose A Chimenea

A chimenea in the garden has over recent years become acommon sight, as they are great decorative features, and also provide a sourceof heat and light if barbecuing, socialising, cooking or setting off fireworks (in thecolder months) in the garden. 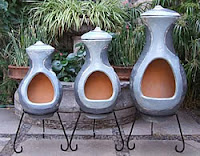 Before researching into chimenea’s though I was not aware of the vast selectionthere is though, and I was also surprised at the range of materials they comein too. Due to the large array of chimenea’s available I’m going to provide thepros and cons of owning a clay, cast iron or steel chimenea, these should help someone when considering whattype of chimenea is for you.

First off we have the classic clay chimenea; these chimenea’s are what I wouldexpect to see when imagining about a chimenea. These chimenea’s are for someonewho likes either a classic look, or a highly decorated look. The styles andvariations of clay chimenea’s are vast and have a more organic feel when in thegarden. Made from clay these chimenea’s arrive to your garden ready to operate withno assembly needs, the biggest concern is lifting it into a stand and how tolight a fire (which shouldn’t concern you for long!).
The down side to a clay chimenea is that they may crack if left out in freezingconditions, and they won’t like being knocked around. In both cases thechimenea may crack and that’s the end of that. If you want a roaring fire likea furnace then a sturdier material would be recommended. Which brings me nicelyon to the next material: 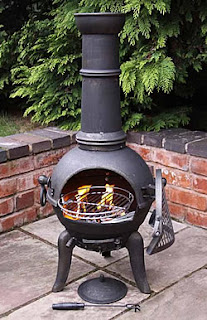 Cast iron chimenea’s allow a furnace type of fire and they’ll burn pretty muchany fuel you desire, they look and are sturdy object, heavy and will last foryears. Cast Iron chimenea’s, as a rule, have much less decorative features,which is subjective to individual taste of course. Once you find a place for acast iron chimenea the likely hood is it will stay there, due to their weightand shape they are difficult to manoeuvre and will require assembly in thegarden. There is a risk of rust affecting a cast iron chimenea, however manylet them rust as it make a more organic look to the item, but that’s apreference thing again.

Steel chimenea’s look manufactured, crisp, and clean, and appear more modern/contemporarythen other materials. Much lighter than cast iron and can easily be moved aroundthe garden (or home......but more on that later!). Obviously with all chimenea’sthe item itself heats up and may become extremely hot, this happens quicklywith a steel chimenea, and it cools much quicker than clay and cast iron too,meaning you can monitor who is near it and when they are near it moreaccurately (keep pets, children and mentally infirm clear when hot).
Negatives to a steel chimenea include they have to be assembled and they may beprone to rust over time, their look goes for them and against, all depending onthe environment they are to be placed.

Chimeneas are great additions to garden, but in more recent times they have becomegreat additions to the home too. Many homes make features in the kitchen,conservatory or fireplace with them, bio ethanol burners and fuel may be usedin them and due to the nature of bio ethanol no fumes are emitted thus no fluerequired. This means chimenea’s may be brought in for the winter months, orhave a permanent place in your homes for years to come as a focal point orfeature.

Although chimenea’s have been around for years, we expect them to become evenmore popular over the next few years. Many thanks for the images andinformation supplied largely by Gardeco, chimenea specialists.
Posted by S Thompson at 11:14