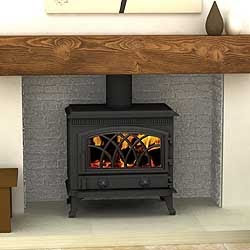 Hillandale stoves have recently released two ranges of stoves into the industry that are proving to be very popular sellers, these ranges are the Monroe and Monterrey.
Hillandale have given the stoves a number in their title that corresponds to

the heat output that they can achieve, for example the Monroe 3 emits up to 3kW of heat and the Monterrey 7 can emit up to 7kW of heat.
All of the stoves in these two ranges are constructed from solid cast iron and have viewing windows that allow you to watch the fire and flames in action. they all have fantastic but differing efficiency ratings too. The 7 models of the Monterrey and the Monroe have 76.3% efficiency, the 5 models have 76.6% efficiency and the smallest 3 models have the largest 81% efficiency. However the Monterrey and the Monroe 3's are not DEFRA approved. Defra approved means that a stove may be used in a smoke controlled area when using smokeless fuels, one of the most readily available and environmentally favorable smokeless fuels is wood, and many manufacturers achieve their output figures from using wood.

As all stoves in the Monterrey and Monroe ranges are multi fuel it means they can all burn solid fuels including coal and peat etc, however the 5 and 7 models are classed as defra approved and can be used in a smoke controlled area when only burning wood and other smokeless fuels.
As standard the Monterrey and Monroe stoves all come ash pans and complementary safety gloves and the stoves are sure to continue making a great impact on the fire industry for the foreseeable future.
Posted by S Thompson at 12:47