These fires essentially are the same as the conventional flue standard fires, with one major difference. Instead of an opening in the top of the fire to allow the fumes to vent through up to the chimney or flue, it has a high pressure extractor positioned on the exterior of the building. This means rather than the passive draw of heat movement up the flue you have a powerful fan sucking out the fumes as well as some of of the heat. 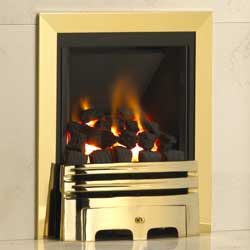 Most Power Flue fire (otherwise known as Fan Flue Fires) quote a similar efficiency to open-fronted conventionally flued appliances of 50-60%, however powerflue fires do also require an electricity supply. These fires have a slightly higher running cost that that of a balanced flue or conventional appliance, due to the extractor fan on the outside, because of this several UK manufacturers have now stopped producing these models. But if you want that real open flame look, without a chimney then the only way is a powerflue appliance.
There is one product on the market which has a very unique feature, not only is it 60% efficient it has a draft barricade appliance on the exterior, contained within the fan flue. The Apex Clarkdale Draft Barricade Power Flue Gas Fire, actually shuts the opening through the wall when the fire turns off, this reduces drafts, increasing the efficiency of your home, so for those whos only option is a Powerflue this is the fire to look at.
Posted by Mark at 09:56