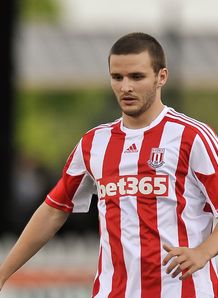 Stoke City's Jamie Ness and his model girlfriend Heather Weir say they owe their lives to their pet labrador after his strange behaviour prompted them to call in engineers. They could not understand why their normally active dog Alfie suddenly wanted to sleep all day. Investigations eventually revealed that the couple's Aga cooker was leaking lethal carbon monoxide gas that could have killed them. One-year-old Alfie was sleepy because he was being slowly poisoned by the colourless, odourless gas. Weir, 22, said: 'Without his strange behaviour Jamie and I would have went months not realizing what was leaking into our home. 'I love him so much and I'm so thankful to have such a wonderful companion - he saved our life.' The 21-year-old midfielder moved from Glasgow to a new home in Cheshire with his girlfriend in July when he left Rangers for Stoke. He is yet to play for Tony Pulis's team in the Barclays Premier League but has represented Scotland through the age groups. After noticing a strange smell, Heather had the stove checked and discovered it had been serviced and passed that month.
However, she said: 'Within the past four weeks, Alfie was sleeping all day. He had stopped playing with his toys and was just very lethargic.' After returning from a family trip to the United States, Heather noticed Alfie was getting worse. She said: 'He just wasn't right at all. Usually Alfie would be up and down like a yo-yo pestering me to play but instead, he went up to our room and slept for five hours.' Heather had experienced a few brief moments of sickness but Jamie did not show any symptoms at all. Determined to get the bottom of Alfie's strange behaviour, she called an engineer out to the home who immediately realised what was happening. He told the couple that if Heather had not picked up on Alfie's sickness their exposure to the carbon monoxide leaking from the stove 'could have been fatal'.

Carbon monoxide poisoning claims the lives of around 50 people a year in the UK.
Stephanie Trotter OBE, president and director of CO-Gas Safety who raise awareness and publish data of CO deaths and accidents, said that carbon monoxide prevention needs a “belt and braces” approach.
She said: “Firstly, well done to the dog and well done to the girl.
“Often our dogs, cats and other pets are more susceptible to the gas because of their smaller lungs and weight.
“That’s why miners used to take canaries down the mines – if they stopped singing you knew to get out because there was CO present.
“We encourage all homes to open windows for ventilation, have their chimneys regularly swept and install detectors – it really has to be a belt and braces approach to keeping an eye on CO.” “Lucky escape”
The RSPCA said pet owners should be more aware of their pets’ behaviour.
A spokesman said: ”This demonstrates the importance of pet owners being aware of their pet’s normal behaviour and of being observant.
“If they do notice any change in their pet’s behaviour it’s important to seek advice from their vet as it could be a sign that their pet is suffering from a medical problem.”
Paul Johnston, chief executive of Gas Safe Register, commented: “The couple involved in this incident had a lucky escape, but tragically others are not always so fortunate.
“Carbon monoxide is a highly poisonous gas. You can’t see it, taste it or smell it and without an adequate supply of fresh air, it can kill quickly.
“The symptoms are also very similar to flu, which at this time of year is worrying if people get the two confused.
Alfie’s poison scare comes at the same time the Royal Society for the Prevention of Accidents (RoSPA) and Gas Safe Charity extended a carbon monoxide awareness programme to Scotland.
Around 10,000 families in the UK will benefit from receiving a free CO detector aiming to prevent any dangerous leaks.
Jennifer Henderson, home safety officer for RoSPA in Scotland, said: “It is important to equip yourself with the knowledge of what carbon monoxide poisoning is, why it is dangerous and how to prevent it.
“The Be Gas Safe programme provides organisations with a valuable opportunity to help vulnerable clients gain access to information and advice that has the potential to save lives.”