New Electric Suites From Be Modern And Fireplace Supermarket 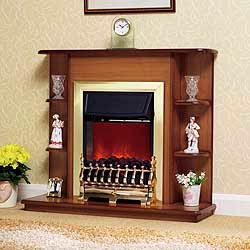 The new range of 'eco' electric suites make use of ultra low energy LED's, dramatically reducing the cost of running the flame effect. To put this in perspective, a standard 60W red bulb which is normally used to create the flame effect, if one of these standard 60W bulbs was used for the fire, 4 hours a day for 5 days that would cost you 1Kilowatt Hour which is normally around 16-18pence, or around £13-£15 for the year with 98% of this energy being wasted as heat. Comparatively when using an LED electric fire and running the flame effect for 5 hours a day, 7 days a week, 365 days a year would cost less than £2 per year based on the same tariff. 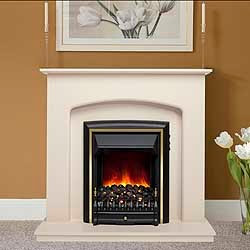 While this saving does not seem like much, only £10 a year, but this is just one way that LED's are cheaper and easier to run. Unlike standard incandescent bulbs, an LED can last for over 100,000 hours without need of replacing, where as you would be lucky to get just 10% of that life from a standard bulb before it blowing and you having to buy a replacement which doubles up on the savings of an LED fire.

The new range of Bemodern suites consists of five different models, The Ashford, Darras, Eden, Gosport all using a realistic wood effect finish and Lusso Eco finished in an Ivory stone effect. They are all designed to be fitted against a flat wall, ideal for those without the luxury of depth to inset a standard fire, they also come with the added luxury of thermostatic control for complete handfree use to maintain that perfect temperature without moving from your seat. 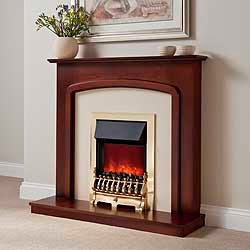 My personal favourite is the Ashford Eco suite, the dark or natural cherry wood effect both work well with the brass trim of the electric fire to accentuate the flame effect in the centre. The simple styling of the mantle with the subtle arch mean this fireplace works beautifully in both contemporary and traditional living spaces.

The Ashford boasts a 2kW heat output, more than enough to take the cold edge off of almost any sized room, which can be controlled either using the thermostat or in 1 or 2kW heat settings for that quick burst of heat.
Posted by S Thompson at 11:58