For those of you who watch Grand Designs, you may have caught the 90 minute special on Peel Castle in Yorkshire. You will have seen the plight of Francis and Karen Shaw and they looked to turn the dilapidated and uninhabitable Peel Castle into a family home.

The episode follows the two year journey from basically a couple of walls being held up with rubble into a stunning family home and bed & breakfast. As you can see below the castle was in complete disrepair. 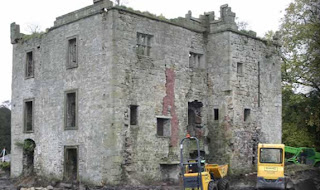 "I first saw Peel nearly 30 years ago on the way to a holiday in Scotland with my parents.
I was navigating so we ventured down nearly every rough track between the Midlands and Oban until they reached ‘tower house fatigue’ and took the map off me. However I had been hooked, and who would not be? It was nestled in a valley within a parkland settling; a castle with parts over 750 years old and the main tower having been built by one of the last Knights Templar" -Francis Shaw 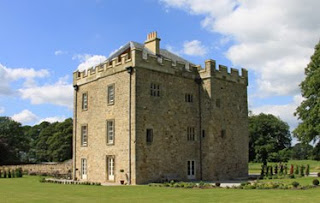 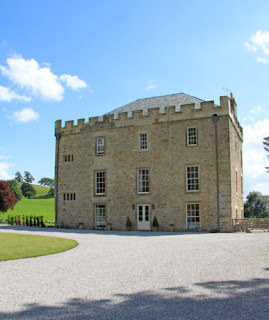 Francis and Karen along with their team of archaeologists, stone masons, builders and decorators worked tirelessly to bring Peel Castle back from the Brink and to the right you can see the finished result:
As you can see from the pictures they've done a fantastic job at restoring the castle to it's former beauty.

Now, enough about the outside of the castle (beautiful as it is). What we want to talk about can be found in the Old Bedroom, Situated on the second floor and the master bedroom, the Old Bedroom is a charming romantic bedroom, combining history and modern day amenities. The en-suite in the Old spiral staircase and King John's 'look out' for the wet room shower is all part of the original Pele Tower.

Nestled in the stunning open fireplace with exposed stone lintel and pillars surround it is the Gallery Firefox stove. The simple styling works brilliantly with both the traditional and contemporary aspects of the room, while the single piece cast iron body means that the maximum amount of heat is transferred into the room. It will not be difficult to imagine sat in front of the stove with the warm glow eminating from the large viewing window and just able to "take stock" as it were of all the history and character of the room and building you are sat in.
The exposed stone on the exterior wall just adds to the feel and almost adds to the effectiveness of having a traditional stove in an open fireplace warming the room. 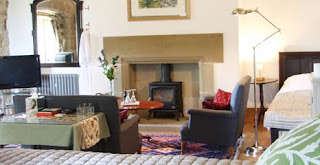 More information on the historic Peel Castle and images of other rooms in this stunning castle visit http://www.peelcastle.co.uk/
Posted by S Thompson at 09:36