A recently published report from the Office for National Statistics, 40% of people admit that they have not taken any action to reduce the use of energy in the home. The National EPC Company also claim that many are still turning the other cheek when it comes to doing their part in the effort to stop climate change. I myself can admit to being guilty of this, I leave lights on when i've left the room and leave my TV on standby almost constantly! 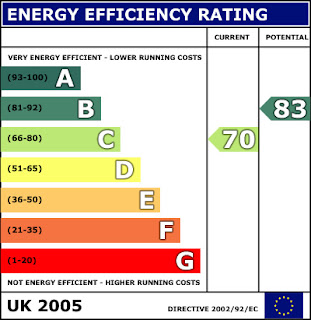 The National EPC Company was established in 2007 and currently supplies more that 85,000 Energy Performance Certificates (shown right) each year. The National EPC Company claim that 40% of the UK's carbon dioxide emissions result from choices people make as individuals, with the majority of carbon dioxide coming from the home.
It adds that the Office For National Statistics (ONS) report revealed that 56% of domestic energy is used for space. The Energy Saving Trust has estimated that the average property owner could save up to and over £300 annually on fuel bills by carrying out some of the basic recommendations outlined in the Energy Performance Certificate which shows how efficient a property is, as a building, it is then provided with an A to G rating depending on perfomance. An example of which can be found here.
Even simple measures such as wall insulation, draught excluders and double glazing can create huge reductions in the amount of energy used, the CO2 emissions and, more often than not the most important factor, Money.
As the colder seasons draw closer and more and more people turn on their central heating and crowd aruond the open gas fire for heat, there is another appliance that can be made more efficient and also provide more heat into the room.
By replacing an old, inefficient open gas fire with a high efficiency gas fire then you can prevent the loss of most of the heat up the chimney and also reduce some of the problems of drafts that an open fire can create. 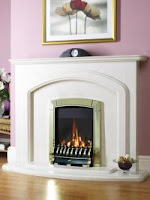 Fires such as the Flavel Caress HE gas fire provide the perfect solution to replacing an aging and in-efficient gas fire, This fire is ideal for a more traditional setting with the cast trim and the traditionl polished and black fret, but don't be fooled by the traditional appearance, this fire uses high-quality and modern technology to provide a 4kW maximum heat output and a very impressive 89% efficiency rating, effectively doubling the efficiency of a normal open fronted gas fire, while retaining the traditional look and feel.

For a more modern approach then something like the Verine Meridian would certainly be the way to go, this modern and contemporary gas fire does away with the traditional trim and fret combination, affording a large viewing window and uniterrupt 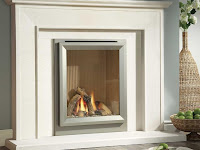 This modern fire boasts up to 87% efficiency with will pump out 4kW of heat energy and with the bronze & champagne or all champagne finishes create a very distinctive and european feel to this fire and features the choice of either black, brick or cream firebacks to suit with almost any interior styling.
These are just a couple of the High Efficiency gas fires that available from places such as Fireplace Megastore or Fireworld, they are available in almost any style or size from Hole In The Wall style to gas fire to highly efficient gas stoves.
Posted by S Thompson at 11:05