When his Volvo's heater broke, Pascal Prokop took drastic action to avoid the bitter Swiss winter and installed a wood burning stove in the front of his car. Since traditional car heaters are proving ineffective in the bitter cold, Pascal Prokop has built a wood-burning stove in his car. He obtained an operating permit for his stove-car from the Swiss Technical Inspection Authority, making it perfectly legal to operate.

He has taken the passenger seat out of the vehicle in order to accommodate the massive heating device and added a chimney to prevent carbon monoxide poisoning from being a problem.
You have to admire the ingenuity at work here and if he does get stuck in any traffic jams or suffers a breakdown, he doesn't have to worry about going cold. 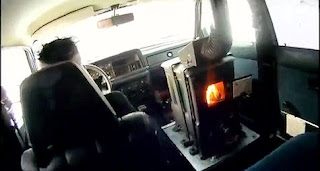 Prokop chose the stove over an electric heater since he can keep the stove burning long after the car is turned off. He told the German magazine Stern, "when I'm tired or have drunk too much, I want to sleep in the car."